I've written the below piece to guide my submission for the Iron Sleet Invitational. I hope you enjoy it. Comments and criticism are always welcome.

EDIT: If you're finding this through the Iron Sleet website, know that I'm also on instagram @kihriban, and I've written a little more about this story here.

"As sure as I can be, my Lord," Geiger said, wiping sweat off his brow.

"I believe I am correct, but unfortunately my Lord, I cannot answer yes or no."

Navigator Delarius had wandered over.  "The Thorne Moons?"  he said. "Routes are still being mapped out. I'm sure I could get you there, but I cannot vouch whether it would take a few weeks or a decade."

Tarralax could see Marris narrowing her eyes at the navigator. Likely already anticipating what he is about to say.

"As I'm sure you remember my Lord," Delarius continued, "my uncle's promise was for two score standard years. We may find that my service to you is over upon our arrival. You would need to find your own way back."

Marris snarled. "We need to be sure Geiger. Do another spread."

Geiger turned towards Tarralax, spreading his hands in a gesture of helplessness. "My Lord, I am not yet recovered from the previous spread."

Tarralax frowned inwardly. Marris' anger was warranted, but the subject was not. "No Marris. Our intel is that they have their own bastardized version of the Emperor's deck. We cannot take the risk that our quarry would feel the ripples of another reading." Geiger's reading had been powerful indeed and Tarralax was fighting back the nausea he always felt in the presence of psychic divinations. And that was through the dampener.

"So read without ripples," Marris protested.

Geiger jumped in before Tarralax could answer. "Marris, I'm afraid only potent readings will uncover the information we seek. Too potent to avoid ripples."

+Being my interrogator does not entitle you to be petulant or rude.+ Tarralax thought at her, taking no effort to hide his feeling of disappointment. He continued out loud. "There is a time for action and a time for prudence, Marris. If I teach you nothing else, I will teach you to distinguish between them."

Marris' cheeks flushed and her mouth snapped shut; her pride wounded. Her master did not normally chastise her in front of others.

Truthfully, Marris was very good at action and she had potential. I just underestimated the amount of growing up she needed.

Geiger had the decency (or the exhaustion) to ignore the exchange, but Delarius looked on with glee, an oily smile spread across his face.

Delarius spread his hands. "I am at your service, my Lord. Please let me know what I can do for you."

"Set a course for the Thorne Moons, we leave as soon as you're ready."

Delarius' smile spread wider and he started to head towards the Navigatorium.

Delarius turned, that smile still stretched across his face.

"I recommend that you exercise extreme caution before deciding that I will be finding my own way back." Tarralax said. "My fondness for your uncle would not outweigh the betrayal I would feel at being abandoned in the Thorne Moons."

Delarius' smile disappeared as he sensed the weight behind Tarralax's words.

Taralax continued. "And you know how the Inquisition deals with betrayals."

Delarius turned and stalked off.

"Now Geiger, let's discuss what else you read in that spread."

~~~~~~~~~~~~~~~~~~~
The plan is to create Inquisitor Tarralax, his Interrogator Marris, his heirophant Geiger and the navigator Delarius.  For the fifth model, I'm considering doing a cybear familiar that Geiger will control with a flute per this: 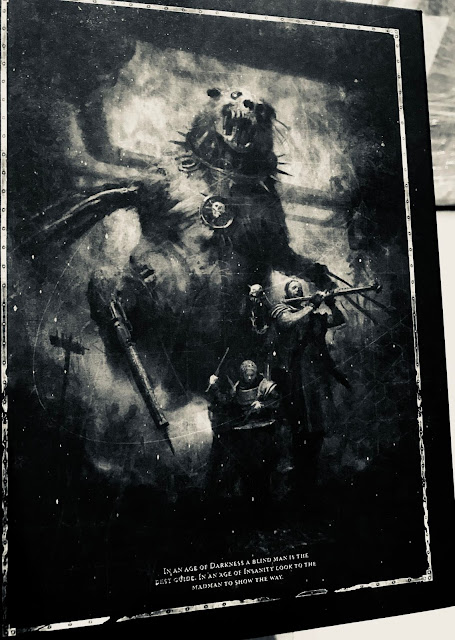